Both Lives Matter urges voters to take a stand for life in the Irish referendum on the 25th May. If the eighth amendment is repealed this will open the door basically to abortion on demand as is the case in the United Kingdom  (except for Northern Ireland). I like the renewed emphasis of’ both lives matter as it clearly states that we are dealing with two lives, the life of the mother and the life of the unborn infant. It has been interesting to observe the posters on display in the Republic of Ireland and the simple message that the unborn child can yawn and kick at just nine weeks.

Both lives matter was also the theme of a roadshow in the North of Ireland which my wife and I attended on 14th May in Belfast. It was an excellent presentation and included the story of Rebecca, a teenage mum (see maverick mum) whose four year old child Reuben is doing great and could easily have been a casualty of abortion.  It is estimated that since the 1967 abortion act came into force in England that 100,000 lives have been saved in Northern Ireland as a result of there not being a similar act in place in Northern Ireland. It is important to remember that we are dealing with two lives and the life of the unborn child is a separate individual with two parents. it is not just an appendage of the mother. 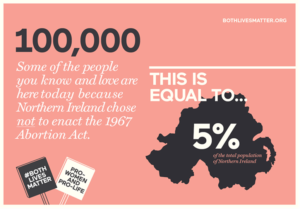 What about the psychological sequelae of abortion? Do these exist? Certainly. This is known by many anecdotes of those who suffer tremendous feelings of guilt and self –  blame following abortion. A  paper by Coleman, which reviews 22 other studies (British Journal of Psychiatry 2011) suggests that women who had had an abortion showed an 81% increased risk of mental health problems and as many as ten percent of mental health problems may have their roots in abortion. Certainly both lives matter. For my book on other mental health issues see Mindful of the Light-practical help and spiritual hope for mental health.

The loneliness epidemic in the UK is a huge problem. Over half of those over the age of 75 live alone which is some two million people.

Not that loneliness is just a problem of the elderly. As a church in Belfast we find that students, particularly those from overseas can be particularly lonely and isolated.

Jo Cox worked hard on the loneliness epidemic before her untimely death and now a minister for loneliness, Tracey Crouch, has been appointed.

It seems fairly certain that our individualistic society and loss of stable family structures have made the problem of loneliness  far worse.

What are the effects of loneliness? All of us will experience loneliness at times.  It has been estimated that the effects of chronic  loneliness can be as bad as smoking fifteen cigarettes a day. It can affect our behaviour, leading for example to problems with drugs and alcohol, as well as affecting our hearts, hormones and  immune systems.

Loneliness can a potent factor in depression and suicide, as well as leading to sleep loss, anxiety and paranoia.

What can be done about it? Well the government initiative is welcome. Perhaps shutting down community resources and libraries needs more careful consideration. Having a funded strategy in place and working together with charities will help, and there is also much that can be done at the local level. In my previous work as a psychiatrist working with the elderly I spent a lot of time trying to encourage lonely and often vulnerable elderly people to join groups and clubs. The nature of the activity was not quite so important as just doing things with other people. And for those who are housebound, linking up willing volunteers with elderly persons can be a lifeline. We can, each one of us, become more alert to loneliness in our local areas. THE LONELY SOCIETY? report is a useful resource and MINDFUL OF THE LIGHT gives further information on mental health conditions that can be affected by the loneliness epidemic.